In September last year our Bearded Dragon Tad Cooper mysteriously passed away. He showed no signs of distress, and then he was suddenly dead. I was told that this sometimes happens with Dragons, but we still miss him. He was very sweet. 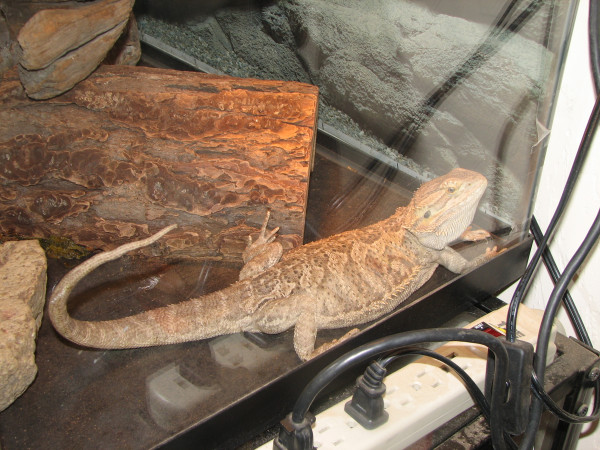 So far, so good! He's still kitten weak, but he hasn't gotten any worse, at least. And he's eating food off a spoon, so yeah, appetite! Not anywhere near out of the woods yet, so keep those good thoughts coming. Thank you, my friends.

This is the day that broke me.

My mother had cancer. She had a tumour removed from her tongue about a year prior, and was told they got all of it (even though it was malignant.) About six months later she started complaining of another growth in roughly the same place, and I started bugging her to get it looked at. She would say, "They told me they got it all, so--"

My mother lived in Tennessee, I'm in San Diego. Making her do anything from a distance is impossible, but I kept on her. I bugged my brothers, who were local to her, to encourage her. Finally she went in to see her doctor.

The cancer had returned. So, they removed another tumour -- and a lymph node in her neck that it had metastasize to. She came through the surgery okay, but I found out after her death that they had sent her home the next day! She had drains in her neck, and she lived on the top of a mountain, more than an hour from any ambulance. She should have been in a rehab place, under care.

My youngest brother Kip, who was staying with her (along with two of his teen kids), said he'd called the hospital a couple of times to say she wasn't responding well, that her stomach was distended, and they brushed him off.

On Wednesday, two days after the operation, Kip said Mom started to cough up black flecks of what was probably old blood. Within moments she was coughing up a lot of blood, and they managed to get her downstairs and out to the car, but no farther. An ambulance was called, but of course they came too late. Mom was too far away from any real help.

We didn't get word of her passing until the next day, when Kip finally told my oldest younger brother Zonker, who immediately called us. We are VERY CONFUSED as to why she's dead. All the surgery was in the neck up. It's been 3 months, and we haven't heard anything from the autopsy we insisted on...

There is more to come, unfortunately.
Collapse